To coincide with the international celebration on 5 March, some of the marketing consortium’s 33 venues tell their own stories of these special connections, which include The Chronicles of Narnia author C.S Lewis, James Bond creator Ian Fleming and poets Sylvia Plath and Andrew Motion.

Regent’s University London offers a range of meeting and function rooms alongside multiple outdoor spaces in 11 acres of private grounds within Regent’s Park. Rooms include the Tuke Theatre with room for 370 delegates; The Refectory with dining facilities for 200 and Herringham Hall for meetings of 120.

St Martin in the Fields and poet Andrew Motion

Former Poet Laureate Andrew Motion wrote a poem to mark the completion of St Martin’s renewal project, which took place between 2006 and 2008. The verse is inscribed on the railings of The Lightwell and says:

St Martin’s in the Fields, on the north east corner of Trafalgar Square, has two conference spaces:  The Crypt and the Gallery and three meeting rooms.

Lumiere London – The Embassy is home to an all-encompassing sound system, allowing sound to be administered through speakers across the whole venue.

The main event space houses a grand red circular masterpiece which disguises a complex piece of technological wizardry. While a focal point of the room, it also acts as the main speaker unit as well as simple PA system for exquisite sound quality for any manner of music, speech or video.

The Embassy, conveniently located in Belgravia, and positioned directly opposite Buckingham Palace gardens, offers something just a little different. After many months of careful restoration of its original features, polishing the former bank’s office’s wood panels and parquet flooring, it has metamorphosised into a rather exceptional event space steeped in statement design.

110 Rochester Row has been working with its catering supplier Eden Caterers to create a menu that is ethical and harnesses the increasing popularity of Vegetarian and Vegan lifestyles.

This new menu is now available and places sustainability at the forefront for catered events at 110 Rochester Row.

The menus change seasonally to ensure ingredients are used when in season and to keep the range fresh, and where possible, are locally sourced.

IET London: Savoy Place has launched a new wine list titled ‘Wines with a Conscience’ as part of a wider environmental initiative.

In a bid to become more sustainable and as consumer demand grows for wines aligned to a more responsible philosophy, IET London: Savoy Place has been scouring the wine-producing world to ensure a more local but equally wide range of wines for events.

The venue will offer a new variety of organic, biodynamic, sustainable and vegan wine that doesn’t compromise on taste, sourced from European vineyards that operate on a self-sustaining ecosystem. Natural materials, soils and composts are used, with chemical fertilizers and pesticides banned from operation.

Closest to home, the menu will feature an organic white wine from London’s only commercial vineyard, Forty Hall, where grapes are grown naturally to preserve the natural characteristics of the vineyard, its soil and microclimate.

For more information on the wines or to find out more about hosting your next event at IET London: Savoy Place, please contact 020 7344 5479 or email [email protected].

Prince Philip House, home to the Royal Academy of Engineering in the prestigious St James’s, has extended its event licence and is now able to accommodate events with dancing until midnight.

Guests wishing to host a summer reception at Prince Philip House can utilise the amazing terrace overlooking The Mall and then move inside to end the night on the dance floor.

With a focus on attracting more receptions, Christmas and summer parties and dinners, the extension is a welcomed addition.

To get in contact about your reception and party enquiries, get in touch on 020 7766 0625 or email [email protected].

Founded in 1996 by husband and wife team Justin Thornton and Thea Bregazzi, fans of Preen by Thornton Bregazzi include the Duchess of Cambridge and Michelle Obama.

Designs are an aesthetic of darkly romantic and effortlessly modern, often juxtaposing the masculine with feminine. Since its first debut collection at London Fashion Show Spring Summer 2001, the label has become synonymous with deconstructed London cool.

This season’s collection takes its inspiration from Venice. Following a holiday to the Biennale, Thea Bregazzi and Justin Thornton combined their impressions of the city with cinematic references from ‘Don’t Look Now’. The show, which was attended by more than 500 guests, featured the dramatic soundtrack of the film, a liquid gold runway, and opulent textures including gold and glitter.

Many of the fabrics in the collection are sustainable, with tweeds made from end-of-line stock from British Woollen Mills, recycled knits, sustainable viscose, and georgettes created from recycled plastic waste.

Models leading the catwalk included Cecilia Chancellor, Yasmin Le Bon, and Ragnhild Jevne, demonstrating that the brand is universal in its appeal.

Following the fashion show on Sunday, Paulette Caletti, producer at Prettybird, remarked: “A huge thanks to the team at Church House for making the show one of our best”.

Robin Parker, General Manager of Church House Westminster, commented: “As in previous years, London Fashion Show provides an excellent opportunity for leading designers to match their inspired collections with creative event spaces in London. The vibrant and spacious Assembly Hall with its gold historic reliefs and elegant oak panelling was a perfect match for this catwalk, delivering on versatility and providing a stylish backdrop”.

This spring, The London Library is teaming up with Creation Theatre to host an exciting new theatre production.

As The Time Machine celebrates its 125th  anniversary, delve into the secret corners of The London Library and travel through time to experience HG Wells’ prescient sci-fi classic as never before.

Writer Jonathan Holloway reimagines the novel to create a world in which time has fragmented, the present is endlessly shifting and the future is strange and uncertain. This surreal, psychedelic adventure draws on cutting edge research from the Wellcome Centre for Ethics and Humanities to challenge our perceptions and raise important questions about time, society and the nature of human existence.

Innovative audio-visual design will transform The London Library’s extraordinary building – where Wells was a member for over 50 years – to create a unique theatrical experience, with audience groups being led by their very own Time Traveller. Expect the unexpected and prepare to be provoked on this journey into the unknown.

To find out more and book tickets, visit https://www.londonlibrary.co.uk/whats-on/58-the-time-machine.

St Martin-in-the-Fields’ Café in the Crypt has been named Café/Bistro of the Year in the Food Awards London 2020.

The awards recognise the success of local professionals and establishments that continue delivering great flavours and experiences to their customers.

The winners are a reflection of high standard and customer service, as they are chosen by members of the general public, who often have eclectic gastronomic tastes.

A spokesperson for The Food Awards London, said: “These awards aim to thank those that work hard within the city’s food industry and contribute to making London a great gastronomic place to visit”.

Andrew Papworth, Events and Sales Manager at St Martin’s said “Our kitchen team is incredible in their ability to create canapés and seated dinners for our venue hire clients. All this whilst delivering breakfast, lunch and dinner to thousands of Café in the Crypt customers daily. They are consistent in delivering on both quantity and quality. It’s fantastic to see their achievements acknowledged by the Food Awards London.”

Perfectly situated on The Mall, 10-11 Carlton House Terrace is a marathon house every year.

For many years the venue has had Cancer Research UK, however for 2020 it has a new charity joining them – Alzheimers Research UK.

The house is set up for family members of those running for the charities to come and watch the footage, and its main function is to celebrate the achievements of the runners and giving them a well-earned break with massage stations and food and drink to say a big thanks for their help in raising money for the dedicated charity.

Each year during the London Marathon, The Royal Society hosts various charities and looks after their registered runners.

Its key location – in the heart of Westminster and in close proximity to the marathon’s finish line at St. James’ Park, makes the venue a sought-after space for various size charity organisations.

The venue’s layout allows for strategic separation in areas for runners’ refreshments, supporters, organisers’ offices and relaxation rooms. Maximum capacity is 1,000, with the majority of the rooms overlooking the Mall and St. James’ Park.

The events team has developed a thorough knowledge of the participants’ needs and are always happy to offer their support with the logistics and carefully selected catering offerings. The dedicated catering team on site – CH&CO has been designing healthy menu options with the runner’s requirements in mind. 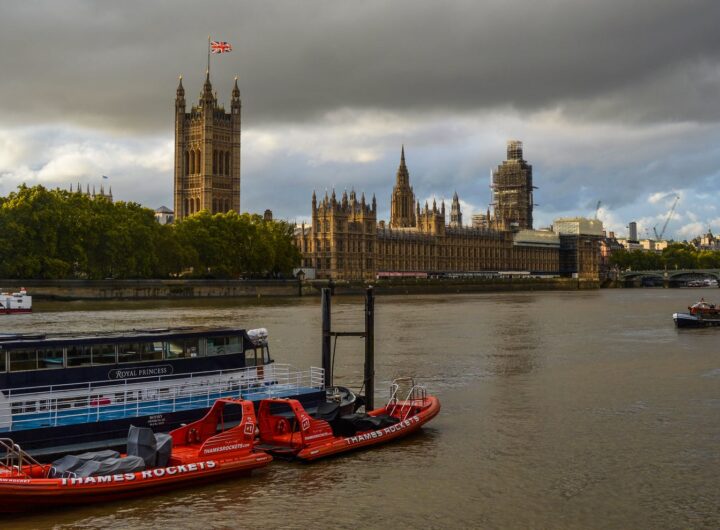 Reaching Westminster events beyond the tube

This National Walking Day (7 April), we recognise some of the many stunning walks around Westminster as well as other forms of transport to safely deliver you to venues in the areas without needing to get on the tube.