QEII blooms in showcase of creativity 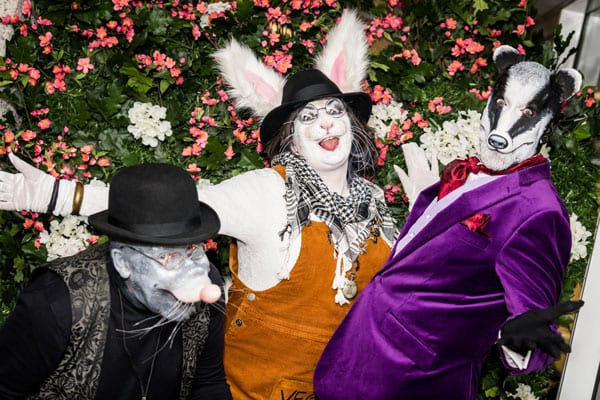 London’s QEII Centre played host to Bloom – a showcase of ‘enchantment, imagination and discovery’ – on 19 February.

More than 150 event professionals were welcomed into the underground warrens of the evening’s three hosts – Mr Badger, Ms Rabbit and Specs – for a drinks reception like no other, with the centre’s fifth floor Cambridge room completely unrecognisable thanks to QEII’s event theming partners, EventTrees.

Guests arrived through a leafy, floral walkway lit with twinkling fairy lights, emerging into the central chamber of the underground-themed space. A signature cocktail from each of the hosts was offered on arrival – Ms Rabbit’s gin, sugar snap pea, lime and mint; Mr Badger’s vodka with vanilla and chai, and Specs’ negroni-style tequila, mezcal, Aperol and rose vermouth.

Moving up to the sixth floor Mountbatten room, with its panoramic views of the London city skyline, guests emerged from the underground into a blooming daffodil, encompassing the entire room with towering petals, floor-to-ceiling projection and the sounds of bees buzzing around the flowers.

Before dinner was served, chief executive of the QEII Centre, Mark Taylor, appeared in fields of daffodils projected around the room, to welcome everyone and look ahead to a year of positivity and opportunity, reflected in the theming and creativity of the evening.

After dinner entertainment came courtesy of Ms Rabbit – in her new guise of Jessica Rabbit, performing sultry cabaret hits while working the room and charming guests. Digestif cocktails were served back downstairs in the burrows, ending an evening of spectacular transformation and creativity that cemented QEII’s position as London’s most flexible large events venue.