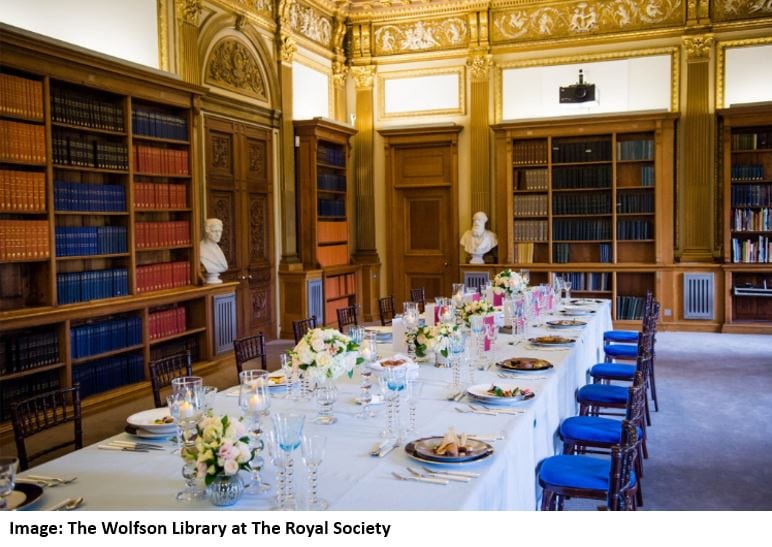 As ‘back to school’ season approaches with students heading off to university for the first time or returning to their place of study, we take a look at stunning venues around Westminster with spectacular libraries.

The London Library
Spread across seven interlocking buildings, with 17 miles of open access bookshelves and over one million books, The London Library has played host to four Poet Laureates and 10 Nobel Prize winners amongst many other notable members.

Featuring beautiful 19th century interiors throughout the building, a selection of spaces are available on an exclusive basis for clients and can include personalised displays and tours of the collection for guests, thereby offering an inspiring and unforgettable event experience. Alongside the beautiful architecture and rich creative history, the venue is in a perfect location for attracting delegates and clients can be assured of being in the very heart of the city and benefiting from the prestige of the many other historic institutions nearby.

Lincoln’s Inn
Lincoln’s Inn’s library is the oldest surviving library in London to have been in continuous existence and the oldest recorded law library in the entire country with references as early as 1475. Today, the space offers a modern working legal reference library for use by any member of the Inn and by the Bar as a whole.

Records in the library archives begin as early as 1422 with entries in Lincoln’s Inn’s Black Books, documenting life at the Inn from its beginnings as an organisation of barristers. The inspiring space offers grandeur, history and infinite possibility for filming opportunities outside of regular opening hours. To enquire, please contact [email protected].

National Gallery
The National Gallery’s library is a hidden treasure and home to around 100,000 resources. The period bookcases, tall ceilings and natural daylight make this behind-the-scenes gem a wonderful filming location.

The library was established in 1870 with the purchase of the private library of some 2,000 volumes belonging to the late Sir Charles Eastlake, the first director of the National Gallery. It now contains around 100,000 printed volumes relevant to the study of the history of paintings in the Western European tradition from the 13th to the early 20th century. The space gives researchers a platform to investigate everything from monographs and catalogues to periodic titles.

Regent’s Conferences & Events
Regent’s University London, as it is now known, was the campus of the first ladies college in Great Britain. The story of more than 100 years of education in Regent’s Park begins with the move of Bedford College to the parkland premises in 1912-13.

Referred to as a “treasure house of learning for the goodly fellowship of students” by Sir Henry Tate himself, The Sir Henry Tate Library was built in 1912 by Amy Lady Tate of Tate and Lyle fame. It was opened by Her Majesty Queen Mary on 4 July 1913 to give students a place of reflective silence and thinking space in the library’s traditional form, alongside modern digital services to facilitate research.

The library houses more than 45,000 paper books but also hosts hundreds of thousands of e-books, e-journals and articles through its online electronic library.

IET: Savoy Place
The Maxwell Library, on the first floor of IET London: Savoy Place, is a large and unique event space featuring elements of the old IET Library and two private riverside balconies with a maximum capacity of 190.

This room was created out of the original long room on the first floor of the building formerly built as an Examination Hall for the Royal College of Surgeons and the Royal College of Physicians in 1889. The IEE (now IET) bought the remainder of the lease in 1909 and repurposed the room as a library. The Maxwell Library retains most of its original 1909 design, with the gallery remaining intact.

The Library collections are now stored within the building and offsite, with the rare books being stored in Savoy Hill House with the Archives. Some of the collections, including the historic journals, are still in the Maxwell Library. The IET Library holds over five linear kilometres of books and journals, from late medieval manuscripts to modern engineering textbooks.

The Royal Society
Meticulously restored to its ornate condition of the 1890s, the Wolfson Library Suite at The Royal Society offers a dramatic setting that can be adapted for a range of events. With views of the Mall, St James’s Park and Waterloo Gardens, and lots of natural daylight, this newly available space is an exceptional addition to the Royal Society’s rooms.

The tenant responsible for this luxurious decor was an American named Charles Henry Sanford, who spent a comparatively brief period (1890-91) in the house, hiring the architectural firm of Ernest George and Peto to design an interior based on that of a (so far unidentified) palazzo in Ravenna.  The first Barings Bank crisis made an impact on Sanford’s wealth.

He was succeeded by John William Mackay, who had made his fortune from the US’s first great silver mine, and his wife (Marie) Louise. Nicknamed ‘The Bonanza Queen’, Louise threw lavish parties in the first-floor rooms which now make up the Wolfson Library. The interiors were left much as Sanford created them, allowing our modern-day visitors to get a glimpse of 1890s luxury living.