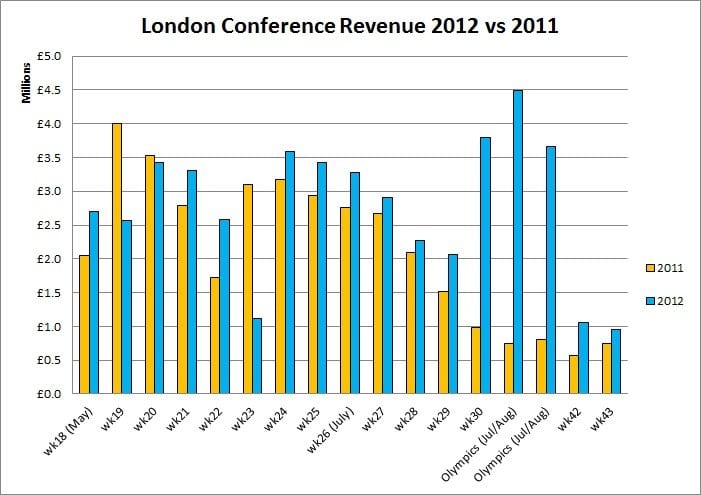 The effect of the London 2012 Olympic and Paralympic Games on the meetings and event industry can be evidenced in new data released today by The Conference Bench.

A sample of 23 London hotels and venues, including several LOCOG designated hotels, posted £10.04 million in revenue (food and beverage and room hire revenue) between 27 July – 12 August 2012, compared to £1.9 million for the corresponding period in 2011 (29 July – 14 August 2011). This indicates a 434% increase year to year, demonstrating the Olympic Games period’s positive impact on the industry.

To put this into perspective, during the busiest period of the entire year in 2011 (25 November – 11 December 2011), the same sample of venues posted just over £11.02 million in total revenue at an occupancy level of 60%.

The three weeks preceding and the three weeks following the Olympic Games indicate revenue performance and occupancy steadied to levels comparable with, yet still slightly above 2011.

The Conference Bench is an internet based performance benchmarking tool designed to shine new light on the performance of your conference and event space against your market and direct competitor set. The service is active in several European markets, as well as in the Middle East, and it is free for participants to obtain market reports in return for daily data submission.