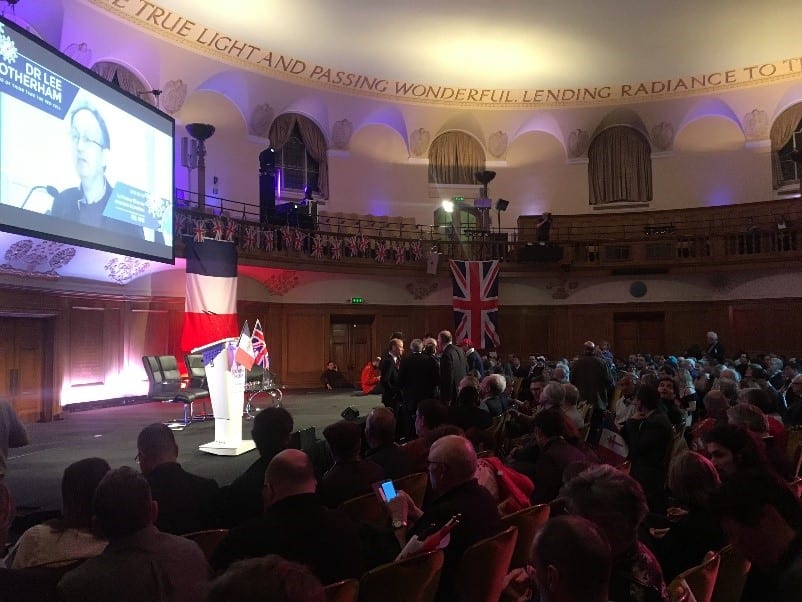 A full house of 650 guests travelled to Church House Westminster from France on 29 March in support of Britain’s exit from the EU.

Yes, that’s right, Frexit! The day Britain was set to leave the EU saw 650 guests attending a party to celebrate independence and international relationships. The fact that Brexit didn’t take place on the planned date did nothing to dampen the enthusiasm of the energetic, partisan audience.

French guests were given headphones to receive live translations of speeches delivered in English, all of which helped create a loud, colourful, good-natured atmosphere within the venue’s largest room, The Assembly Hall.

The next challenge was to feed 650 very hungry French nationals within the allotted 45-minute break. In keeping with the theme of the evening, a bowl food menu was created including classics like bangers and mash, and fish and chips alongside French wine to celebrate the best of both countries.

Re-fuelled and raring to go, the speeches continued through to midnight when the evening was concluded with a rousing rendition of God Save the Queen and “La Marseillaise”. As guests departed the Assembly Hall, they were handed a glass of Brexit-branded Champagne, imported especially to toast the event that never happened!