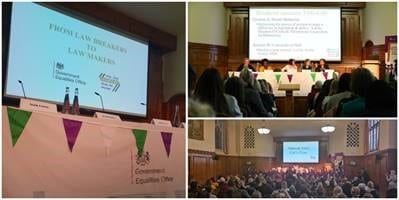 The 21st of November 2018 marked 100 years since the first women gained the right to stand for election to the House of Commons. To mark this centenary celebration the Government Equalities Office chose to host their conference “From Law Breakers to Law Makers” at Church House Westminster on this date.

On arrival in the morning the Bishop Partridge Hall was used as an exhibition and networking space, which were supported by the Fawcett Society, the Jo Cox Foundation, the Centenary Action Group and 50:50 Parliament.

Almost 200 guests then took their seats in the Hoare Memorial Hall where the National Youth Choir performed before proceedings commenced for the conference.

The panel of speakers included:

Baroness Anne Jenkin – Conservative Member of the House of Lords

Attendees were able to learn from women lawmakers who have made a difference to the country. They were also encouraged to remember the work of the women, and men, who won women the foothold of equality. The speakers delivered inspiring speeches during the conference, underscoring the event hashtag #AskHerToStand to encourage more women to become candidates and to stand for political office.